The BEST Limited Slip! This is the limit slip we use in our own Project Fiat 124 and we also run the OSGiken unit in our Supercharged Race MX5. We are proud to be an authorized OS Giken dealer. OS Giken has been producing performance parts for both OEM manufacturers as well as the aftermarket since 1975. Professional racers, home grown racers, and performance enthusiasts alike have come to know and respect OS Giken, and we are honored to be able to bring these products to you.

1. Lock Timing Technology " under normal driving conditions, the OS Giken LSD acts just like any normal differential. Once full power is applied, it turns into a true 100% locking unit. However, unlike other clutch type differentials, what separates the OS Giken from others is how smoothly this transition is performed. In addition, due to unique gear driven center section, the OS Giken differential is extremely responsive, allowing it to transition from lock to unlock instantly.

2. When we say 100% lock, we mean 100% lock! Many lesser differentials on the market claim 100% lockup ability, but due to their low number of disks and small diameter, they never are truly able to sustain such high lock percentages...ESPECIALLY IF YOU HAVE A BOOSTED MOTOR! Not so with the OS Giken. These differentials feature more disks than any other differential on the market, which are placed in a forged housing. This not only keeps heat to a minimum, but spreads the load over a greater number of disks, which is the reason it works so seamlessly.

3. Less undesteer = more goodness! When your car enters a corner off throttle, the spring inside the patented pressure control ring reacts immediately and the differential immediately unlocks. This is done so quickly and efficiently, that the car is able to turn in quicker than with conventional differentials. However, when power is put down upon corner exit, the OS Giken unit immediately returns to 100% lockup, allowing for less chance for wheel spin.

4. No More Figure 8's!!! Ever wonder why some aftermarket differentials require you to dizzy yourself with endless figure 8's as a break in? The reason is simple "because the components used are not machined as precisely as in other units. The OS Giken unit is built to such stringent tolerances, there is zero break in required. Simply install and go!

The uniquely tuned "lock timing" allows the diff to run looser until torque is applied. This feature give the diff a super smooth takeup when exiting corners. Data logs show it accelerating harder than a factory Torsen or modified OEM clutch type. Fully rebuildable at authorized service centers all over the world Fully tuneable, can even be set up as a full 1 way or 2 way.

FLUID: You must use the OS Giken gear oil with this limited slip! You need one bottle for install, sold separately on our site. Get an EXTRA can too, if driving the car in competition you should change the fluid at least once per season, the schedule in the manual for the average grocery getter does not apply when you race the car!

As raced by our entire crew, track and autocross! 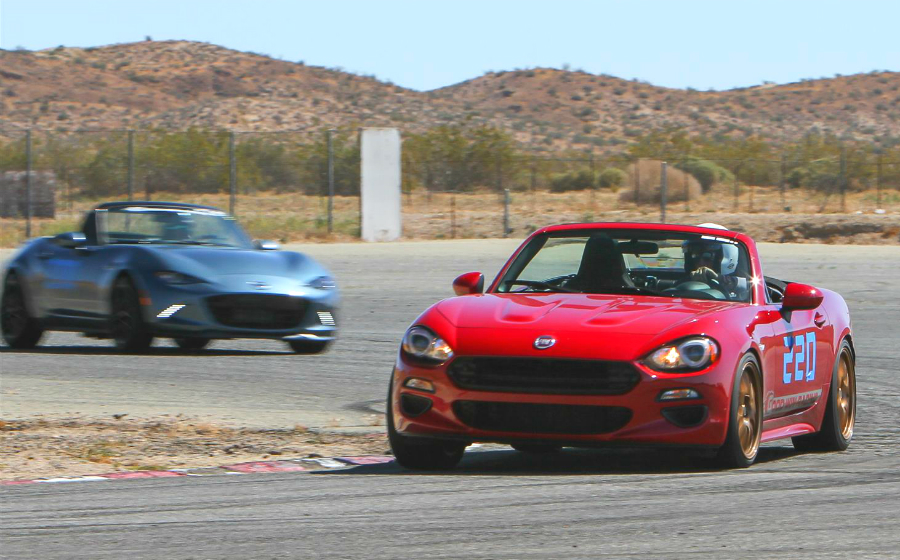 VIDEO COMPARISON of NO Limited Slip vs Limited Slip. Our Fiat 124 'Fiata' in SCCA autocross. We started with base model Classica, no limited slip. About 17 seconds after the start of first video below I am heading uphill and slightly left and you can actually SEE the black tire line of slightly unloaded inside driver's rear wheel spinning and you can hear car is not hooking up. We overlaid the data with buddy in supercharged Miata that I compete against and he gained over half a second on me in just the ONE instance of slip, and there are several more on the video. Our estimate at the time was that lack of the limited slip was costing us roughly 1.5 seconds that day.

We sent our stock rear housing to Japan for our friends at OSGIKEN to develop their famous limited slips to the Fiat's housing (same as ND Automatic). With the OsGIKEN back from world travels and installed in our Fiat 124 now the autocross videos looks like below...notice now you cannot hear any time lost to wheel spin. Hear the difference? With video above we were still getting into the setup on the car and we were 2.5 seconds slower than the faster STR guys, now we are often faster than ND in STR....even on same tires (video below finished 1.5 seconds ahead of fastest STR ND instead of 2.5 seconds behind thanks to better suspension setup, alignment, other bits....and limited slip). What may not be so obvious from the video comparison is driver confidence goes up when not so concerned with being gentle throttle on corner exits. Without limited slip I had to feather throttle at places until car hooked up straight, and I often adjusted my line to get weight on both tires earlier than ideal. With the limited slip I can run 100% throttle much more of the time, get on throttle at corner exit just a bit earlier, and dial a more ideal line and just let the limited slip do it's job of hooking me up out of corners. Oh yeah....with limited slip it's both faster and more fun!